Allison Cordes and Sammy Nielsen are healthy and hungry 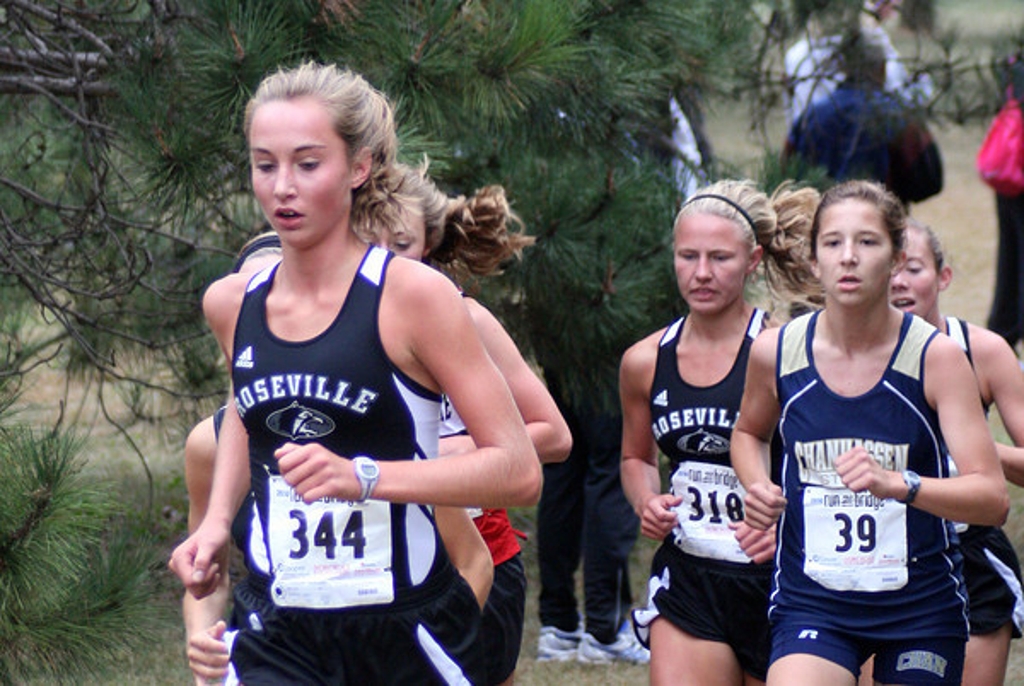 Sammy Nielsen (left No. 344) led Roseville with a fifth-place finish at the recent Metro Invitational at Round Lake Park in Eden Prairie. Allison Cordes (back right No. 318) placed sixth. All photos courtesy Jim Birdsall 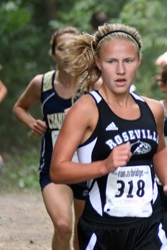 Allison Cordes was 14th at the 2009 Class 2A state cross country meet.

Even with state titles and other notable performances on their competitive running resumes, Roseville juniors Allison Cordes and Sammy Nielsen are excited to make fresh starts this season.

The duo shined as freshmen in 2009-10. Cordes and Nielsen were the team’s No. 1 and No. 3 runners, respectively, as Roseville placed sixth at the Class 2A state cross country meet. Cordes took 14th overall to earn all-state honors. At the state track and field meet in the spring, they each ran a leg of Roseville’s first-place 4x800-meter relay team.

A strong follow up season went off the rails as Cordes endured a self-inflicted leg injury and missed out on the section and state meets. Nielsen took steps forward, going to state in cross country and taking second at the state track meet in the 800. But she was adjusting to a growth spurt throughout the season.

Reunited and healthy, they are tasked with coaxing the team to its full potential.

Effort is an attribute Cordes seldom lacks. Her coach, Mary Schifsky, said Cordes is “a student-athlete that always gives 110 percent no matter what she’s doing.” In fact, Cordes pushed herself too far last season. She did supplemental calf raises in the weight room during physical education class and strained her left calf muscle by mid-season.

The soreness subsided as she ran and she shrugged off the post-run stiffness as the cost of doing business in cross country.

“I kind of wanted to just keep doing it for the team,” Cordes said. “I knew I could still keep pushing myself through it. I wanted to see how bad it was because I’m kind of one of those people who doesn’t want to stop and be a wuss. It’s like my fifth-grade teacher would say, ‘Is it pain or is it an injury?’”

But as the season wore on the pain got worse. So did Cordes’ performances. An intial X-ray showed no deeper concerns, but a MRI after the Suburban East Conference race revealed a stress fracture in her lower leg.

“I think I got the stress fracture pushing myself through the conference meet,” Cordes said. “It was really hurting then.”

While the Raiders went to state without Cordes, they fell six spots from the previous year to 12th.

Cordes wasn’t the only runner battling her body. Nielsen grew about five inches during her freshman and sophomore seasons and struggled at times with her coordination. During a two-week period last season she fell three times during races.

“I kept tripping over my own feet,” said Nielsen, who stands 5-foot-11. “Now I’ve grown into my body and I can just be a strong runner.”

Nielsen ran for North St. Paul in the seventh- and eighth-grade before coming to Roseville. She was the Raiders’ third-fastest runner (and 73rd overall) at the 2009 state meet. Last season she improved to 48th. And last spring she was runner-up in the 800 at the state track meet and helped the 4x400 relay team take ninth.

Schifsky said Nielsen considers herself a “track girl” but is beginning to see her running skills are transferable.

“Coach has helped me build up my confidence and know that I can be as good in cross country as I’ve been in track,” Nielsen said.

The duo worked harder (and smarter) to prepare for this season. Nielsen logged summer training on the pathways around her family’s home in Maplewood, concluding each run with a grueling climb up the hill her house sits atop. While proud of her ability to run through pain last season, Cordes has vowed to avoid “doing stupid stuff” like unapproved workouts and is even sitting out next week’s Powderpuff football game as a precaution.

It’s a new year. But their performances at the recent Metro Invitational at Round Lake Park in Eden Prairie felt like old times. Nielsen placed fifth overall in a competitive field, one spot ahead of Cordes.

“I am truly fortunate to have such hard working girls on my team,” Schifsky said.