Team and individual champions will be crowns in boys’ and girls’ races in Class 2A and 1A at St. Olaf College in Northfield. 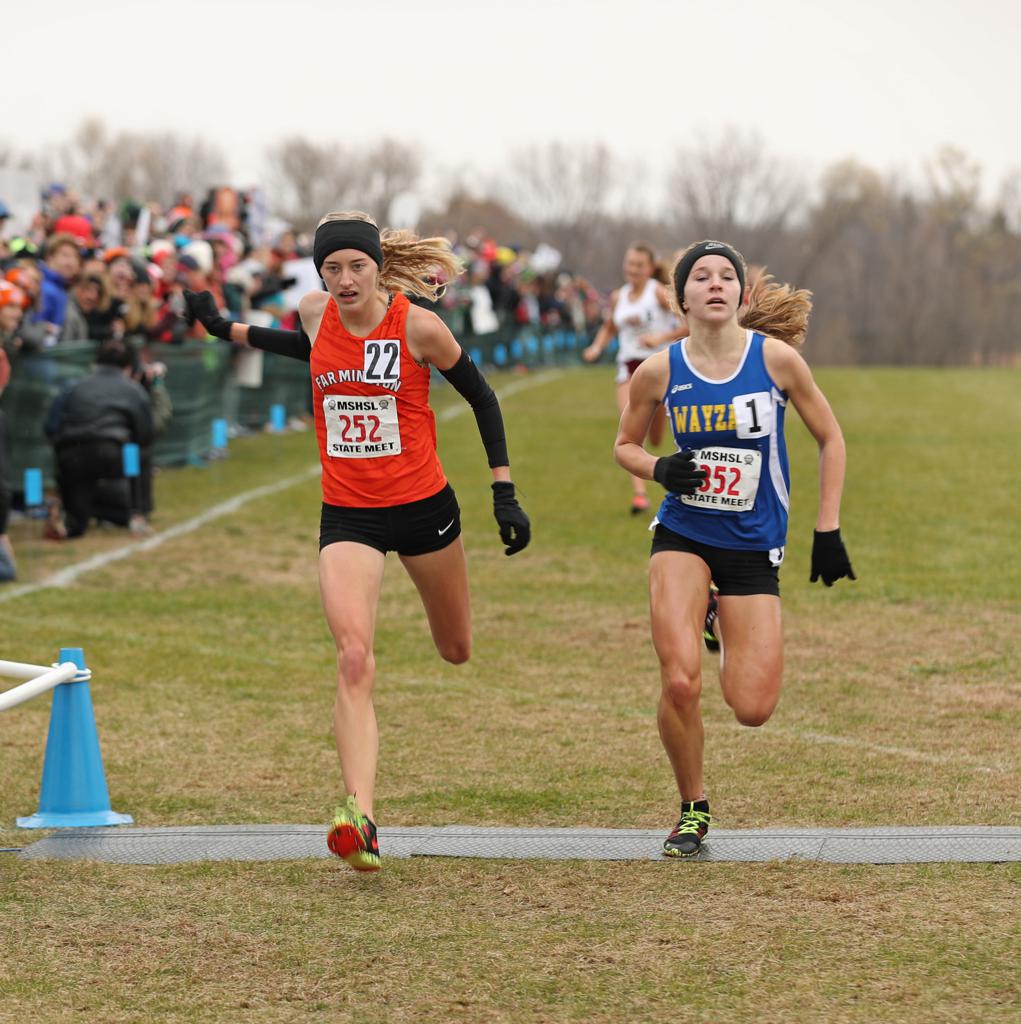 Farmington’s Anna Fenske, left, finished third and Wayzata’s Emma Atkinson fourth in the 2018 girls’ Class 2A cross-country meet. Fenske, now a junior, won the race in 2016 and is among the favorites to win on Saturday. Photo: Shari L. Gross, Star Tribune

Cross-country is the name of the sport. The name of the game, however, is getting the best from five of your seven runners on the same day.

“We have had some ups and downs with iron and sickness, and the girls haven’t really all felt good about their races on the same day until this section meet,” Strait said.

The results were encouraging. The Knights won the Section 5 meet for a sixth consecutive year and jumped in the coaches ranking from No. 8 to No. 4. They will chase top-ranked Stillwater, No. 2 Edina and No. 3 Wayzata.

Team scoring is determined by the place finishes for the five fastest runners of each seven-person squad.

Projecting the state meet individual medalist honors starts with Farmington junior Anna Fenske. She won the meet as an eighth-grader in 2016. After the top-ranked Fenske comes Wayzata’s Abbey Nechanicky, Stillwater’s Analee Weaver and Molly Moening of St. Paul Highland Park. Moening led the Scots’ team to state for the first time since 1980.

On the boys’ side, Mounds View hopes to end the high school season as it started, with a victory in Northfield. The Mustangs won the St. Olaf High School Showcase on Aug. 29 on the same course.

“We certainly have a chance,” Fleming said. “We did last year, too. But Eden Prairie is the favorite and White Bear Lake is right on our heels.”

“They warrant attention,” Fleming said of the Hornets, “because they know how to peak. There’s a culture of expectation there.”

“This season has been about checking boxes,” Fleming said. “They see the state meet as another box. The three seniors know what it takes and what they want.”

Individuals in the title mix includes Chanhassen senior Nicholas Scheller, the highest returning qualifier, having placed fifth in 2018. Eastview senior AJ Green was eighth. But senior Oliver Paleen of St. Paul Highland Park, 10th a year ago, holds the No. 1 spot in the coaches ranking.

Junior Geno Uhrbom of Greenway/Nashwauk-Keewatin returns to defend his title. In team competition, Perham aims for its third consecutive and eighth overall title. Metro area teams in the field are Nova Classical Academy of St. Paul, Minnehaha Academy/Hope Academy of Minneapolis and Heritage Christian Academy, which includes students from West Lutheran of Plymouth.