Coach’s emotions spill over in aftermath of his first title. 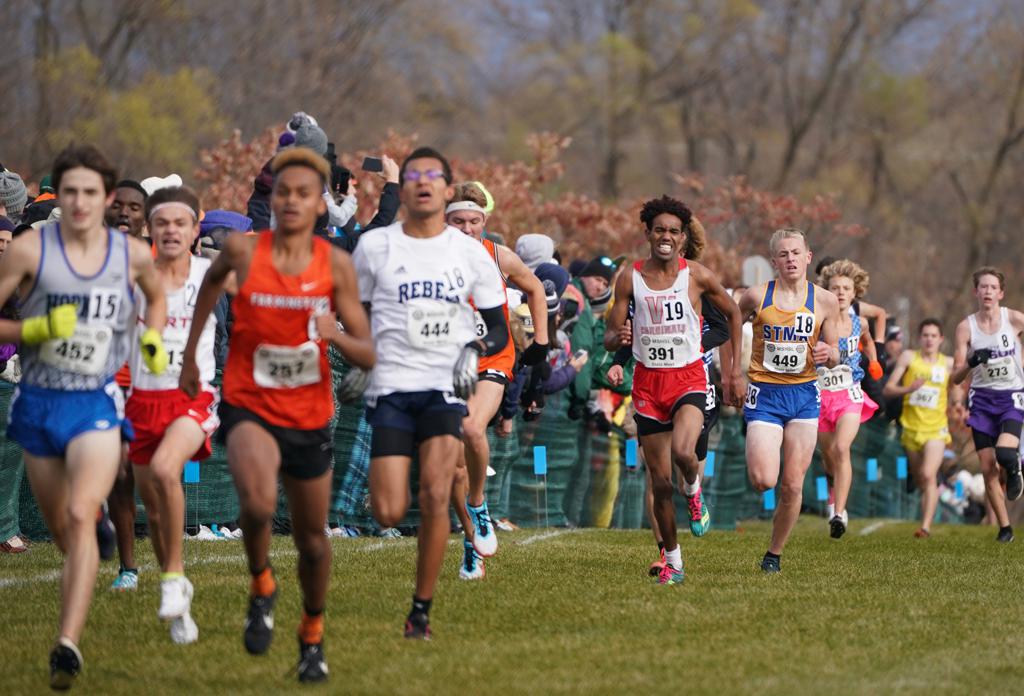 A pack of runners during the boys Class 2A cross-country race at St. Olaf in Northfield [Photo by Shari L. Gross / Star Tribune]

NORTHFIELD, MINN. – Mounds View cross-country coach Ross Fleming, who just completed his 34th season, once brought a hazmat suit to the team banquet as a gag gift for a senior runner who developed poison ivy during the season.

On Saturday, after his Mustangs earned the program’s first Class 2A state championship, Fleming’s wise guy persona disappeared. He hugged runners and their parents, shook hands with coaching peers and wept tears of joy in a less-guarded moment.

“It’s a humbling moment because you realize how little you had to do with it,” Fleming said. “Our seven guys were out there getting it done in the trenches.”

Seniors Finn Sokolowski, Alec Nelson and Will Sacay “did their usual stellar, clutch racing,” Fleming said, adding that ninth-grader Elliott McArthur “probably had his best race of the season.”

Santino Preciado running strong at the fifth spot made the difference.

“After the race, coach Fleming gave us the rundown and told us we won,” Preciado said. “I teared up and was jumping up and down. The team wanted to do this for coach Fleming.”

“We had the tightest pack among the top teams, so we knew had to do it for each other and with each other,” Richter said.

“I was like, ‘It’s state!’ ” Weaver said after winning the Class 2A state title. Going back to sleep wasn’t happening so she “just sat in my bed, thinking about the course. I was like ‘OK, I got it, stay strong.’ ”

Running with the leader for two miles, Weaver pulled away for a victory in 17 minutes, 46.1 seconds. Wayzata freshman Abbey Nechanicky placed second in 17:52.8, followed by 2016 champion and Farmington junior Anna Fenske (17:58.5).

“I started feeling pretty good at the 4K, so I just started pushing it, and upping the pace,” Weaver said. “I guess it worked.”

There was a talented field, a dusting of snow on parts of the course and a raw wind blowing across the prairie loop portion of the course.

None of it stopped Weaver. 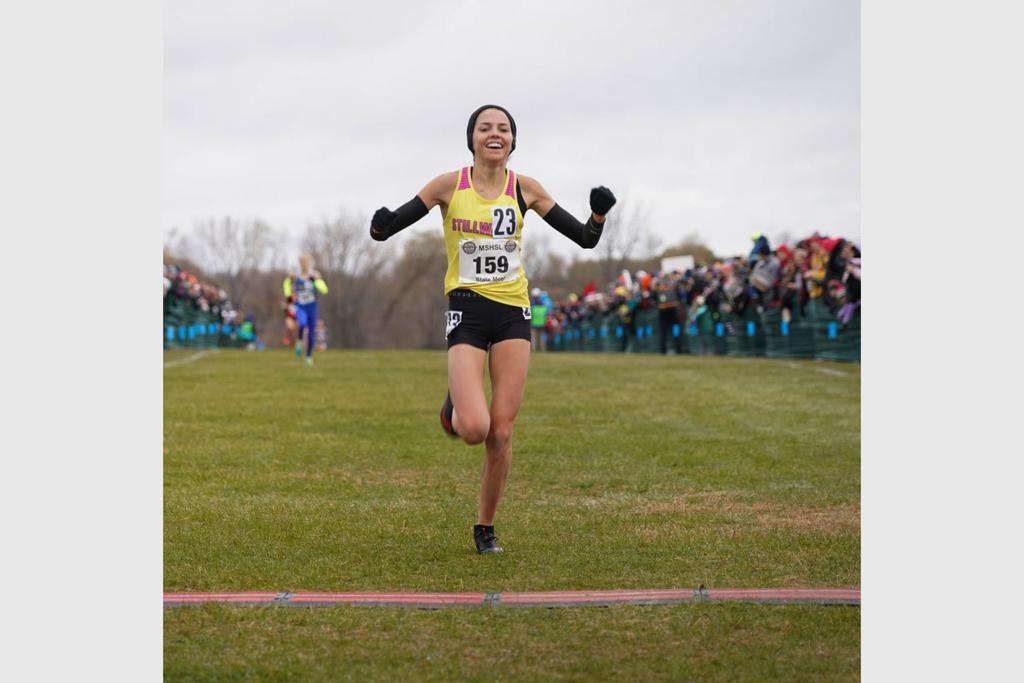 He outkicked Eastview senior AJ Green, winner of the past two 800-meter state track and field titles. Paleen won in a time of 15:25.2, ahead of Chanhassen senior Nicholas Scheller (15:30), who also outkicked Green (15:31.8) for second.

“I wasn’t sure on that last hill what AJ still had so I kept looking back down the straightaway,” Paleen said of a habit that irks his mother and grandfather.

“They hate it,” Paleen said. “They take videos and you can hear them shouting, ‘Don’t look back.’ ”

Paleen reflected on his journey, from 10th last year to champion.

Sitting in the auditorium for the medal presentation last year, Paleen said he “asked my coach, ‘A year from now, I want to be the last guy that gets on stage. What’s it going to take?’ Now we’re here.”

Spittle clung to the underside of Geno Uhrbom’s chin. Dark circles formed under his eyes. He had just emerged from the medical tent, which he entered under the power of two race officials supporting his limp body.

The Class 1A state meet record was Uhrbom’s reward for pushing himself to the brink.

The Greenway/Nashwauk-Keewatin junior repeated as champion in a time of 15:27.6, bettering the 2005 performance by Mike Torchia of Rochester Lourdes (15:28.8).

“That was the most pain I felt in my whole running career,” Uhrbom said. “It was worth it, though.”

Morgan Gehl of Murray County Central, who placed third in 2018, was the highest returning qualifier in the Class 1A field. With a goal to take first, Gehl ran on guts and instinct.

“I really don’t have a strategy,” said Gehl, a junior. “I just went out there and ran my race.”

She won in a time of 17:53.5. And Perham earned a third consecutive team title.