Mounds View High School senior Zach Roozen has adopted an all-in approach as the key to success, be it in the solitude of running cross-country or in front of the camera as a budding actor. 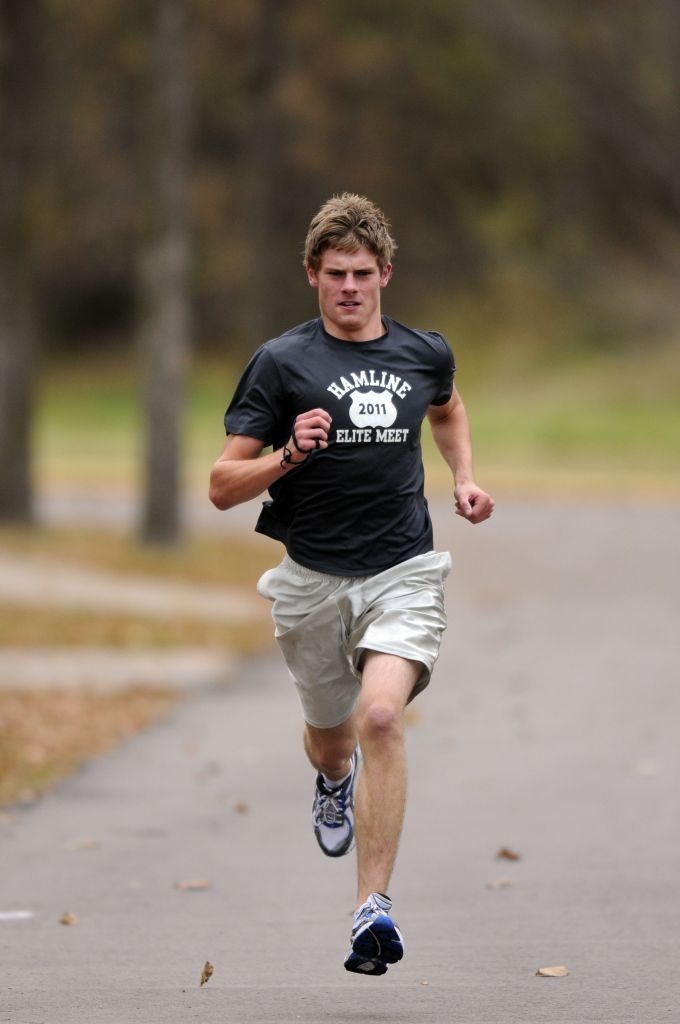 Roozen postponed an after-school cross-country workout because he had a modeling gig and a student council function.

They had scaled fences both tall and short to reach the track. Roozen ran while one friend timed him and the other cheered to break the silence. It was about 10 p.m. when Roozen looked up to see all the stars shining bright. Then it hit him.

"I remember taking a moment and thinking, 'This is what it's about for me,'" said Roozen, a senior ranked No. 10 in the state.

He credits acting, his other passion, with helping to shape an awareness of when and how to lose himself in the moment. Months of professional teaching helped launch Roozen's budding film career while also earning him modeling opportunities.

While most proud of his work in several independent films, Roozen is best known locally for appearing for about three seconds in the first Nickelodeon Universe "We Want Your Scream" commercial.

Roozen's two passions compete for his time and energy. They also make him whole. He brought the determination and drive of a distance runner to acting and took what he learned about more meaningful communication and sense of self back to cross-country.

"Every single race you risk losing and everything you do in acting is a risk," Roozen said. "But without taking the risks, you can never really be who you are."

Sports and film were Roozen's two hobbies growing up. When he wasn't playing baseball, basketball, football, lacrosse or soccer, he worked both sides of the camera, directing friends or acting alongside them in videos they would upload to YouTube.

Roozen chose cross-country as an eighth-grader. His first impressions had cinematic vibes.

"It just seemed like the runners worked so hard but at the same time, I felt like it looked smooth," Roozen said. "It was like they were floating around."

Roozen said he planned to "make it look that easy" someday. But losing his first junior varsity cross-country race in the final moments provided an education.

"I'd like to say I haven't been outkicked since then," Roozen said.

He certainly has not been outworked. When writing letters of recommendation for his runners, Mustangs coach Ross Fleming uses key words to guide his thoughts. For Roozen, the word is driven.

"He doesn't do anything without investing all that he is," Fleming said.

By his sophomore year, Roozen's focus on running began worrying his mother, Robbie. Always an advocate for her son's myriad interests, she agreed when he asked to attend Cynthia Uhrich's In the Moment Acting Studio in St. Paul. There he found parallels in running and acting he never imagined.

Patience for the process

Eventually, Roozen learned about himself. Uhrich recalled Roozen "standing there laughing" when she first pushed him outside his comfort zone with exercises such as humanizing the traits of a puppy in a character.

"He felt foolish," Uhrich said. "It was interesting to see how an athlete can be so mentally and physically pushed but how very different it is to be asked to express yourself and your emotions."

Uhrich worried Roozen's initial frustrations would lead to him quitting. But he was more determined than discouraged.

"Acting really accesses the part of you that doesn't want to put yourself out there and forces you to do that," Roozen said.

Uhrich also encouraged Roozen, who she called "wildly photogenic" to pursue modeling. He's appeared in various catalogues and can be found on kiosks around the Mall of America. Modeling, he said, is something he does to pad his résumé and bank account for acting.

He found the discipline of watching and listening for other actors' verbal and non-verbal cues -- staying in the moment -- enriched his life in other ways.

"Before, if I met somebody it was like, 'Hello,' and maybe that was it,'" Roozen said. "Now I try to feel more connected to people when I'm talking to them. Even when I'm running, I see a guy and think, 'He's fighting, too. I realize it's killing you and it's killing me, too, but we've got to fight through that.'"

A future in film

Roozen began the final weeks of his varsity cross country career on a high, topping a strong field at the recent Lions Meet of Champions in Alexandria -- a victory he hopes will propel him down the season's stretch run.

Roozen placed 23rd at the Class 2A state meet last fall, but bigger things are expected this time. He was ranked as high as second in the coaches' poll this season.

Trying to keep his achievements in running and acting in perspective, Roozen said he "doesn't want to be defined" by early-season rankings or three seconds of face time on television.

He even asked Fleming "to not broadcast" his involvement in acting. Roozen said he prefers to "keep things kind of chill."

Next fall, Roozen plans to attend a college where he can continue pursuit of his passions. He recently applied to Loyola Marymount University in Los Angeles, home of the School of Film and Television, which is ranked No. 19 nationally by The Hollywood Reporter.

Those aren't neon dreams getting the best of Roozen's emotions. He believes in the craft. The first time he stepped on a professional set felt a lot like his run under the stars.

Roozen said he "took it all in: the smoke coming in through the windows of the house, the boom lights, the people running around."

"I took a step back and thought, 'This just feels right,' Roozen said. "I don't care what I do, I want to be in film."