The COVID-19 pandemic has split team training into pods. Even at the starting line, runners take off in waves governed in size by health department guidelines. 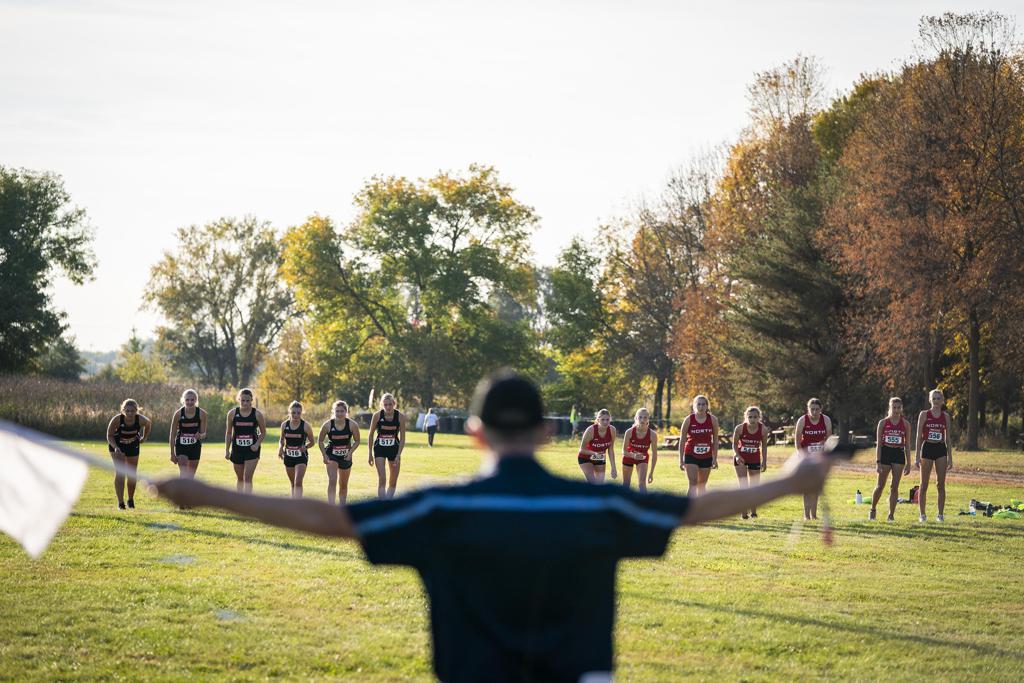 When the Farmington and Lakeville North girls' teams raced Thursday, start times were staggered into smaller groups to spread out the race and encourage social distancing. Photos: LEILA NAVIDI • leila.navidi@startribune.com

This first wave of runners bolted from socially distanced team pods on the start line. The second wave started 60 seconds later. Both the staggered start and the separation were examples of competition in the COVID-19 era.

Even the setting, the Dakota County Fairgrounds, owed to the need for increased space and the lengthy duration of the meet. Farmington’s run against the Lakeville schools was the second triangular meet of the afternoon, following one involving Eagan, Eastview and Shakopee.

Now, runners in the second race must compare results from the previous race to determine their overall place. Spain said he knew he won right away because he reviewed the earlier times before his race.

In the girls’ 5K race, senior Anna Fenske won in 18:02.3, giving the Tigers a first-place sweep. Both runners have adjusted to the quirks of a unique season.

“The first race, I was a nervous wreck,” said Spain, who helped Farmington advance to the Class 2A state meet last season. “I thought it was going to be so different. Then I came back the next week with some experience and then I knew I could do it.”

Fenske, the Class 2A state champion in 2016 and one of the state’s top runners this fall, said, “Everything about it is different. Our whole team can’t practice together.

“We’re in three pods at the same time and place, but it’s completely different. I’m bummed about it. But I understand.”

Gone this year because of the pandemic are the sport’s large signature Saturday invitationals. In their place, conference meets involving nine or 10 schools — with boys’ and girls’ teams competing two and three at a time — can take as long as eight hours to complete.

On Thursday, teams set their camps and warmed up in different portions of the fairgrounds. Runners, many wearing masks, weren’t permitted at the starting line until five minutes before their race. Afterward, they were required to return immediately to their camp or team bus.

“You have to be your own biggest fan and stay confident in yourself because there aren’t going to be other people around to help you,” Spain said.

Robbie Spain of Farmington led the boy's race and won the meet.

Eastview activities director Matt Percival said Thursday’s meet ended an hour earlier than some held at the season’s start, a sign of better efficiency by all involved.

Fans are not allowed at most meets this season because it’s too hard to keep tabs on 250 people, the overall limit. Percival ran a free livestream through the “EVTV” YouTube channel. He said viewers on more than 300 unique device watched the action.

“Our kids and parents know it’s not perfect,” said Percival, whose daughter, Emily, placed fourth in the first meet. “But they are appreciative because a large number of them lost their track season in the spring.”

“It would be fun to see how we stack up against the whole state, not just the conference,” said Fenske, whose sister, Mariah, a ninth-grader, placed second Thursday.

Despite all the challenges behind and those still ahead, the older Fenske said, “Once you get into the race, everything is fine.”

Not so for the sport’s leadership. Coaches have been told to expect a rule change related to COVID-19 that diminishes postseason opportunities. The pending section format is four teams simultaneously competing, with groups of six runners spread apart on the start line.

The overall 24 runners is compliant with the Minnesota Department of Health’s requirements for outdoor recreational race events, which limits participation pods to 25 runners.

However, that means teams must reduce their race roster by one runner, thus no seventh runner.

Brandon Heebink, president of the cross-country coaches advisory committee to the MSHSL, said the pod-size requirement has “caused frustration for a lot of coaches. They are abiding by it; they just haven’t seen any data as to why that’s where the number is set.”

Heebink, an assistant coach at Wayzata for boys’ cross-country and track, added, “We want 28 runners. In one race, how much of an added risk is three more runners?

“When you look at football, there are 22 players on the field. When you add substitutions, that’s more than 25 players.”

The Minnesota State High School League board of directors is expected to vote Oct. 1. In the meantime, Heebink said, “some activities directors are working behind the scenes for us.”

“Maybe we’re running into a dead end,” he said. “But I think there are still reasonable ways to give those seventh runners an opportunity.” 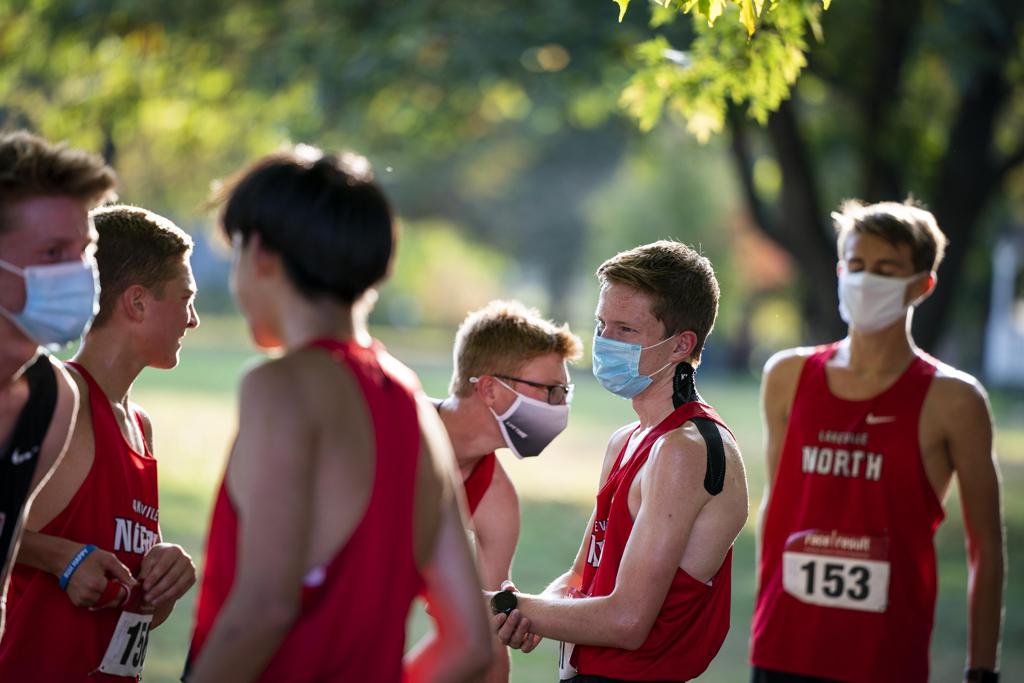 Lakeville North runners gathered with masks on after their race.