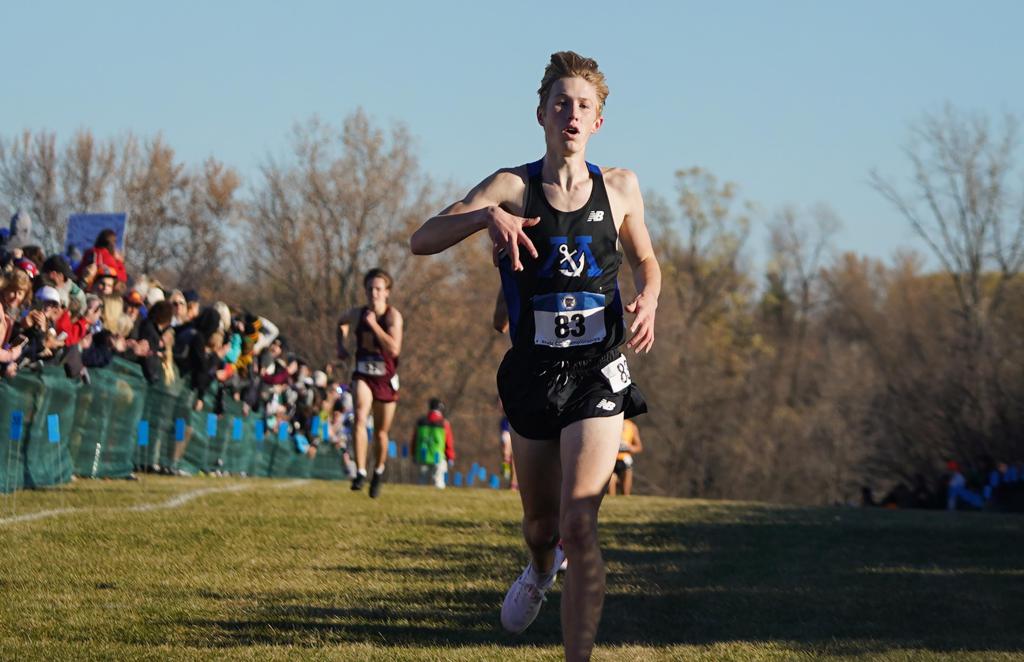 NORTHFIELD, Minn. -- Moments from achieving a Minnetonka boys’ distance running first, junior Nick Gilles contorted the fingers on his right hand into the shape of the letter M.

Gilles won the 5,000-meter race in Class 3A at the boys’ cross-country state championship Saturday at St. Olaf College in Northfield. He finished in a time of 15 minutes, 22.81 seconds an became the first Skippers’ male to win the individual title.

The M sign was a tribute to the alumni he knew were watching the live race results on a livestream broadcast.

“I had to represent where I’m from,” said Gilles, who trailed Armstrong’s Noah Breker at the two-mile mark before surging ahead.

Neither of the two best runners in Class 1A, also the leaders of the best two teams, got exactly what they wanted Saturday.

Top-ranked runner Finn McCormick of St. Paul-based Nova Classical Academy collapsed on the hill leading to the finish line, losing a wide lead over second-ranked Jakob McCleary of Perham in the process. He regained his footing and finished eighth overall, contributing to the team score and the public charter school’s first state title.

McCleary won the individual title in a time of 16:09.64 as Perham’s streak of three consecutive team championships ended.

They pair battled for ninth place at the Griak Invitational in late September. McCormick won that duel by nine-tenths of a second. Saturday’s rematch didn’t completely satisfy McCleary.

“I don’t think the win was really a fair win,” McCleary said. “It was tough to see him fall because I was really hoping it would go down to a guts race.”

Wayzata’s 13th team title was much greater than the sum of its parts. It’s believed the Trojans are the first championship team without a finisher among the top 25.

“We have a lot of guys with similar ability,” said junior Hamza Mohamed, who led his team with a 26th place finish. “It helps us push each other and that helps us be successful.”

Freshman William Weber, who placed right behind Mohamed, helped pull the pack along between the first and second miles.

Breck junior Alden Keller led the Class 2A pack with a 4:44.04 first mile.

“I’m better when I’m racing with a lead,” he said.

“I’ve always wanted a big title,” he said. “I was more confident. I knew I had a shot, and I wasn’t going to blow it.”