The sweltering summer has challenged cross-country runners training for the upcoming season. 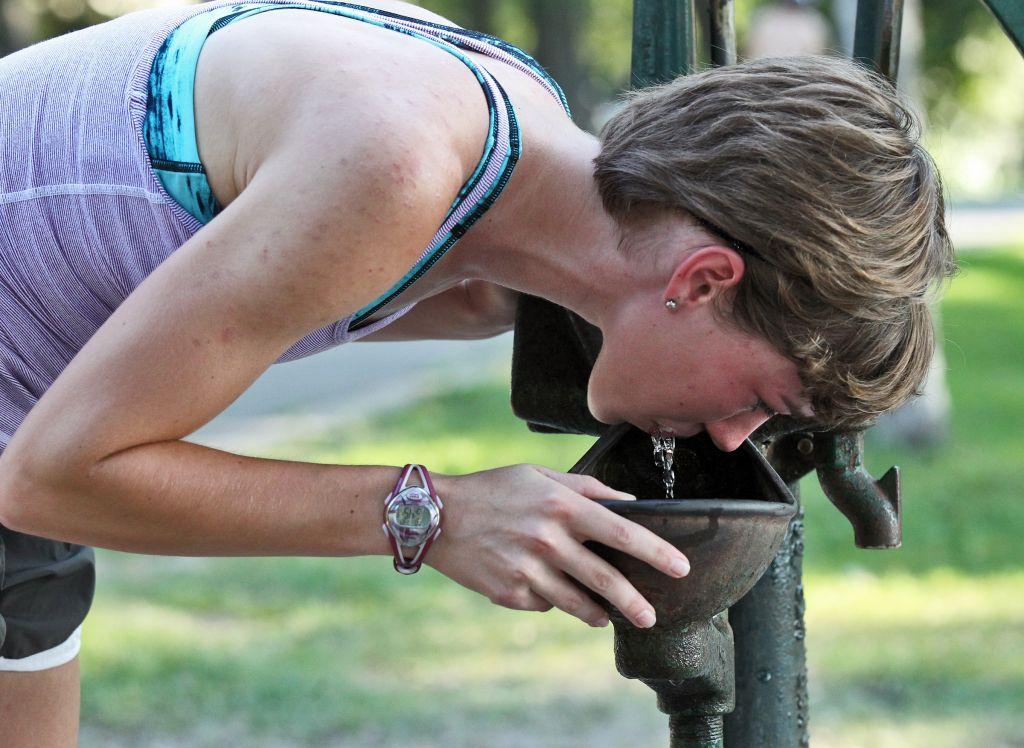 Blake cross-country runner Clare Flanagan drank water at a fountain to stay hydrated during a recent training session at Lake Harriet in Minneapolis. She has concluded a few such training runs by jumping in the lake. Photo by Marlin Levison • mlevison@sta

It's 3:30 in the afternoon and Shakopee senior Maria Hauger is sprinting her way through the day's second workout, testing her limits and her coach's faith.

It's 87 degrees and humid, meaning Hauger, winner of the past three Class 2A cross-country state titles, will finish her sprints looking as if she emerged from a swimming pool.

"It's definitely been the hottest summer I can remember," said Hauger, who added Class 2A track and field state 3,200- and 1,600-meter titles last spring. "I don't like the humidity but I usually battle through it."

Relentless in pursuit of their goals, elite Minnesota high school cross-country runners are weathering an equally dogged summer of high heat and humidity. According to the National Weather Service, Twin Cities residents endured the second-warmest July on record. The lowest temperature recorded at the Minneapolis-St. Paul International Airport was 64 degrees.

Nevertheless, runners must build the base for fall success in the summer. Hauger logs more than 60 miles per week, many of them alone because a work conflict prevents her from training with her Shakopee teammates. Blake junior Clare Flanagan -- who swept the Class 1A cross country, 3,200 and 1,600 crowns -- averages about 40 miles per week. Andover junior Chris Meados, who just missed all-state status at the cross country state meet last fall, puts in about 60 miles per week.

"I worry about kids like Maria who have high goals and need to get their base miles in," Shakopee coach Mark Neu said. "We've been telling our kids to avoid running during the hottest part of the day and to run close to home."

"I kind of go with how I feel," Hauger said. "I never really feel too bad, but if I do I work around it."

Hauger starts her runs at 6 a.m. She goes "eight or nine miles" on Mondays, Tuesdays and Thursdays. She switches to tempo runs on Fridays, increasing her pace in spurts. She adds afternoon workouts those days.

Competition comes on Saturday in the form of 5K and 10K runs such as the Shakopee Derby Days, where she was fifth overall and first among females. Runs of about 12 miles are reserved for Sundays.

To prepare, Hauger goes to bed by 9:30 each evening and maintains good hydration. A temperature of 95 degrees forced her to postpone one afternoon workout until about 8 p.m. And she often douses her head in cold water after her workouts.

Flanagan knows the feeling. She's concluded a handful of training runs around Lake Harriet in Minneapolis by jumping into the water or putting her feet in Minnehaha Creek.

"It's kind of hard to get motivated," Flanagan said. "It's like, 'Uh, it's going to be 95 degrees.' But you embrace the heat because you have to."

Flanagan said high temperatures cancelled "four or five" team practices but admitted "a couple teammates and I still showed up and ran." But a stifling summer has kept several uninitiated runners off the trails.

"For a brand new runner it's tough at first and the heat just makes it worse," Flanagan said. "We just tell them not to take risks and to stop if they have to."

"The big thing is to go out and do whatever you can do but you don't want to cause physical harm," said Lee, who lessened the workload for one practice because of the heat. He also pays special attention to his younger runners who, according to Flanagan, check their pulses during workouts.

"You have to back off sometimes of how fast or how intense you're running," Lee said.

Meados finished three-tenths of a second out of all-state contention as a sophomore last November, which serves as motivation this summer. Asked if he might prefer the weather this summer, Meados said, "I wouldn't say it's more enjoyable but it definitely sets you up for success if you can plow through it."

Meados' coach, Scott Clark, encourages all of Andover's runners to be cautious while staying committed.

"We tell kids if they're feeling run down to back off, but we haven't made a real big deal out of it," Clark said. "You can't let weather dictate everything. It's important to tolerate it."

Added Lee, "The big thing is to find a way to deal with it."

At Shakopee, Neu said his runners still are vying to earn a T-shirt recognizing at least 100 miles of running this summer.

Flanagan said the high number of miles in high heat could pay dividends.

"I think when the weather starts getting better, we'll all feel a little extra boost and get faster," she said. "Maybe this summer has made some of us realize you can push yourself when you have to."