Singing a new tune at Eagan 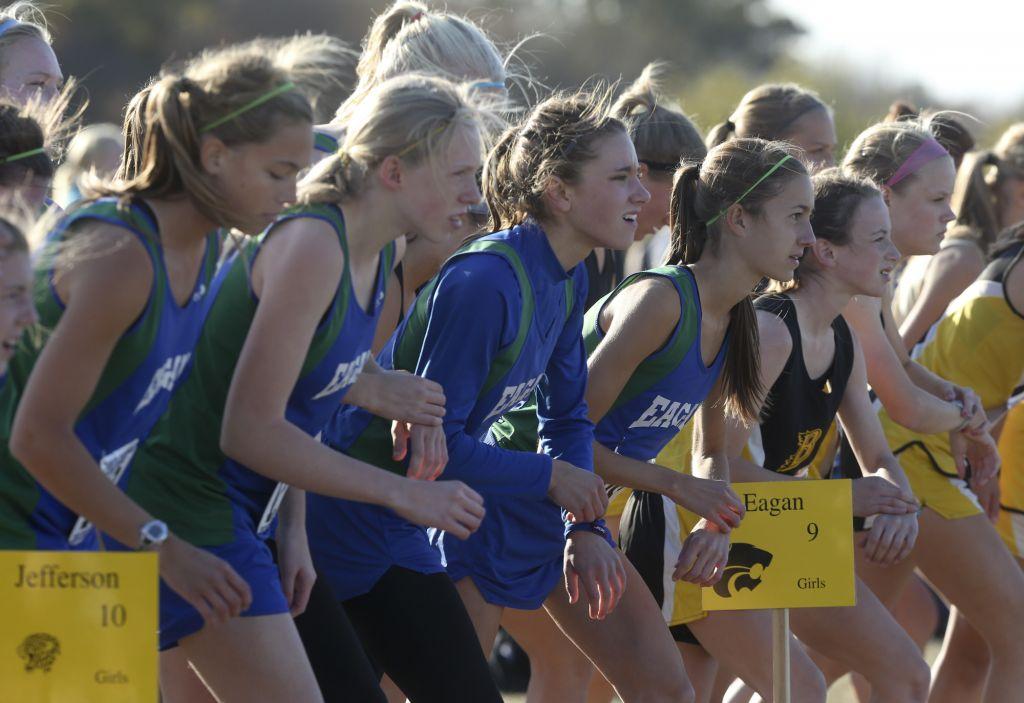 Eagan runners were set for the start of the South Suburban Conference race. The Wildcats won the team title by placing five runners in the top 11. Photo by Kyndell Harkness • kharkness@startribune.com

Eagan senior Danielle Anderson never envisioned herself as a choreographer.

Anderson, one of the state's best girls' cross-country runners, has done just that both on and off the trails in her final season. She is ranked second in the state in Class 2A, helping the Wildcats claim the top team rating.

She also led the team (both boys and girls) on a rendition of Carly Rae Jepsen's song "Call Me Maybe" -- currently airing on youtube -- as they returned home on the bus from a meet in Wisconsin Rapids on Oct. 8.

"I think that represents our team; we're all having a lot of fun," Anderson said. "We have really come together, and are close to each other."

The Wildcats' climb to No. 1, after opening the season ranked third, can partially be attributed to Anderson taking on more of a leadership role this year.

"I had to get closer to my teammates, be friends with them," Anderson said.

Quite a change for somebody who preferred to go unnoticed a year ago. If the team would have made its recent video a year earlier, Anderson said, "I would have been in the back, not doing much."

Instead, Anderson has been up front since the first meet of the season. She covered the 4-kilometer course in 13 minutes, 48 seconds en route to first place at St. Croix Bluffs in Hastings.

"I was especially surprised with my time for the first meet of the season," Anderson said. "The ground for the meet was really uneven, and those kind of courses have been my slower times in the past."

Anderson has not broken 14 minutes since the opening meet, but has been consistently posting faster times than a year ago.

"It hasn't been just me. Everybody has improved their times," Anderson said. "We have all stepped it up. We're more confident than a year ago."

It showed in the South Suburban Conference meet, won by the Wildcats. It was their first conference title in school history.

"Everybody on our team had a great race," said Anderson, who was the medalist with a time of 14:04.6 and broke the conference record time of 14:06, held by Elizabeth Yetzer of Lakeville. "That was one of goals [conference record] coming into the season."

The Wildcats only graduated one of their top seven runners from last year's team that finished ninth at the state meet. They had five runners place in the top 11 spots in the South Suburban Conference meet.

"All of our runners put in more miles over the summer," Eagan coach Lisa Langenhahn said. "We were young last year [three freshmen]. They know what to expect now."

"We all know what we can do, and don't stress out about it," Anderson said. "In order for the team to do well, we have to have everybody doing well."