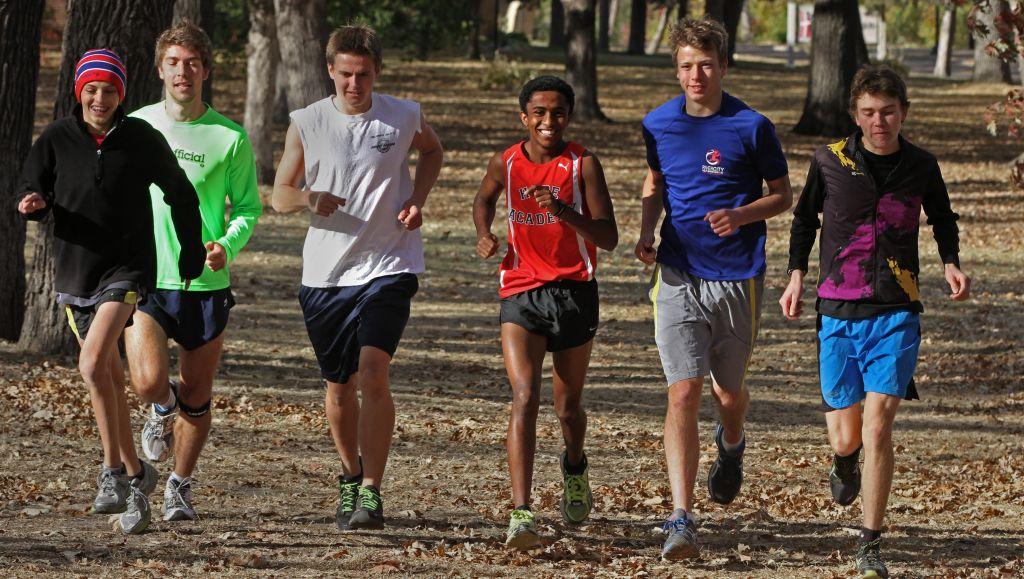 Ephraim Bird, wearing red, ran with the Minnehaha Academy cross-country team recently. Adopted from Ethiopia at age 13, he attends Hope Academy in Minneapolis, which does not have a cross-country team. Photo by Bruce Bisping • bbisping@startribune.com

The first time Ephraim Bird ran in a cross-country meet, he threw up. And then he won the race.

That pretty much sums up the fledgling running career of Bird, at 5-4 and 105 pounds a slightly-built sophomore who is trying to become the first athlete to represent tiny Hope Academy in Minneapolis in a state tournament.

The story began four years ago, when Jeff and Widdy Bird of Minneapolis adopted Ephraim from Ethiopia to join his younger brother Aman, whom they had adopted three years earlier.

Home-schooled for a year, Ephraim enrolled at Hope Academy, a Christian school in south Minneapolis, in the fall of 2009. While academics were a family priority, Jeff Bird was also determined to expose Ephraim and Aman to as much of American youth culture as possible.

"I tried just about everything," Ephraim said.

He took a liking to soccer. But Jeff couldn't help but notice that whenever Ephraim ran, he left others in his wake.

"At the school's track day in eighth grade, he ran the mile in about 5:20 in basketball shoes," Jeff Bird said. "It seemed like that's where his talent was."

But at first, Ephraim wasn't hearing it. He wanted to play soccer. The idea of running long distances held little appeal.

"I didn't really like running," Ephraim said. "But my dad made me run. He said, 'You're more gifted as a runner than a soccer player.'"

His first training run came last August. He ran 5K in 18 minutes, 32 seconds, not bad for a first outing.

"I didn't feel good, though," Ephraim admitted. "I was struggling with my stomach. I would throw up after running."

Quitting crossed his mind, but with an occasional nudge from his dad, Ephraim continued to run.

Sensing his son's potential and with a desire to help him fulfill it, Jeff Bird sought out experienced help.

Hope Academy was not an immediate option because it did not field a cross-country team. Jeff searched for schools that would consider agreeing to a cooperative agreement.

He landed on Minnehaha Academy, which had an agreement in place with the school for football. The problem was that it was mid-August. The Minnesota State High School League's deadline to file for a cooperative agreement had long since passed.

Minnehaha coach Christian Zimmerman agreed to let Ephraim train with his team, but the athlete was on his own when it came to participating in meets.

"I had to find meets for him, and it wasn't easy for a team of one," Jeff Bird said. "Luckily, I knew the Minneapolis South coach, so he let Ephraim run in their invitational."

That was Aug. 30, barely three weeks after Ephraim took up cross-country.

"I especially didn't feel good during that race," Ephraim said. "I threw up while I was running."

Like it or not, he could now see that his father did indeed know best about his potential.

Improvement has come quickly. Training with Minnehaha Academy -- ranked No. 3 in Class 1A -- and finding regular races in which to compete, Bird has wowed observers.

"He's an untapped talent," Minnehaha coach Christian Zimmerman said. "He's just figuring out how to run. The sky's the limit for him."

He added another victory Sept. 27 at the Bloomington Jefferson Jaguar All-Terrain Invitational. He considers his best race to be a fifth-place finish in the Class 1A Division at Duluth's Swain Invitational one week later.

"There were so many runners,'' he recalled. "I didn't want to get caught in traffic, so when the gun went off I ran out in front. For about 10 seconds, I was ahead of everybody."

Running is coming easier for Bird now. The members of the Minnehaha Academy team treat him like an equal. There is talk of a cooperative with Minnehaha for next year.

Until then, his focus is on his goal of making the state meet -- to be held Nov. 3 at St. Olaf College in Northfield -- as an individual.

Oh, and he now readily admits that dad was right all along.

"My dad said that he knew what was best for me even if I couldn't see it," Bird said.

"I think I understand. I really enjoy it now."