A Coon Rapids 8th-grader is faster than varsity teammates but can't compete with them. 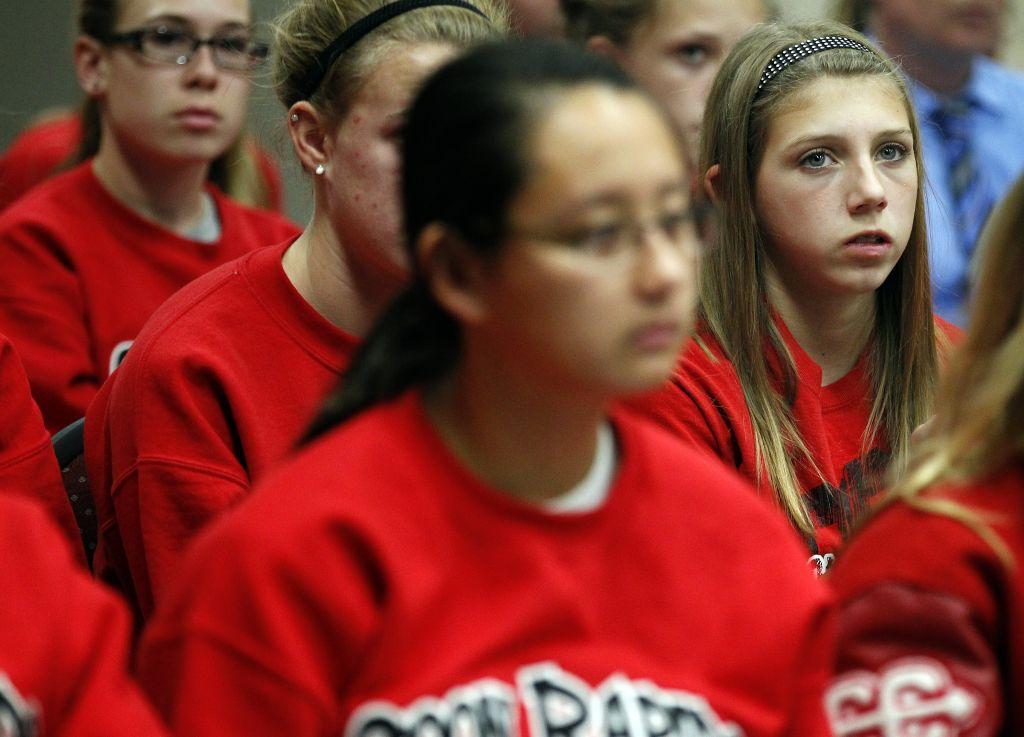 Surrounded by her teammates, Coon Rapids cross-country phenom Bryna DelCastillo, 13, listened to her mother, Sue DelCastillo, address the Anoka Hennepin school board on her behalf Monday night. The board held a closed session on the matter after the regul

Eighth-grade cross country phenomenon Bryna DelCastillo can beat any girl on the Coon Rapids High School team, her coach says. But it's unclear whether she'll be able to beat a deadline that would allow her to run in Thursday's sectional meet.

Although the Minnesota State High School League allows seventh- and eighth-graders to compete in varsity events, the Anoka-Hennepin School District is the only district in the state that requires almost all varsity athletic teams be composed solely of high school students.

That rule, challenged several times over the last 20 years, came under fire once again Monday at the district's school board meeting, with Bryna's mother and nearly 3 dozen varsity team members in red sweatshirts making passionate pleas on the 13-year-old runner's behalf.

"She's only asking to run with her peers in a spot she has earned, instead of running after a golf cart in the JV meet," Sue DelCastillo, Bryna's mother, told the school board.

Board members did not respond to the appeal presented during the board's regular public comment period.

Bryna moved from Alexandria to Andover before the school year, after her father, Doc DelCastillo, was hired to coach the Hamline University hockey team. She became an instant sensation with the Coon Rapids cross country team -- with all 43 girls signing a petition, asking that she be allowed to run with the varsity team.

Paige D'Heilly, a senior captain of the team who has gone to the state tourney two years running, said Monday night that her teammates "want the opportunity to chase Bryna in a race. The times do not lie. She is faster than us."

Bryna has been described by her coach, Don Timm, as more than "the best runner we have this year." Timm, one of the greatest runners the University of Minnesota has ever produced, said he was accompanied by legendary University track coach Roy Griak when Bryna outran her varsity teammates earlier this month at the Northwest Suburban Conference meet in Elk River, where a pair of eighth-grade runners helped the home team capture the conference title.

"Coach Griak said he's never seen anything like Bryna," Timm said. "He coached at the university for three decades and I've coached for 40 years and we both think she's in a class by herself."

In Apple Valley, Tyrus Jones is considered the nation's top point guard for the class of 2014. He started as an eighth-grader.

At Tartan High in Oakdale, Jake Sullivan started for the varsity basketball team in the eighth grade. When his high school career ended in 2000, he was only the second Minnesota boy to score 3,000 points.

Anoka-Hennepin's more restrictive rule has been a subject of contention for 20 years and has been amended several times.

Bryna's teammates want her on the varsity -- so much so that some of the varsity athletes have asked if they could practice with the JV team, just to run with Bryna.

"My teammates support me," Bryna said. "They're not offended that a middle-schooler is faster than them.