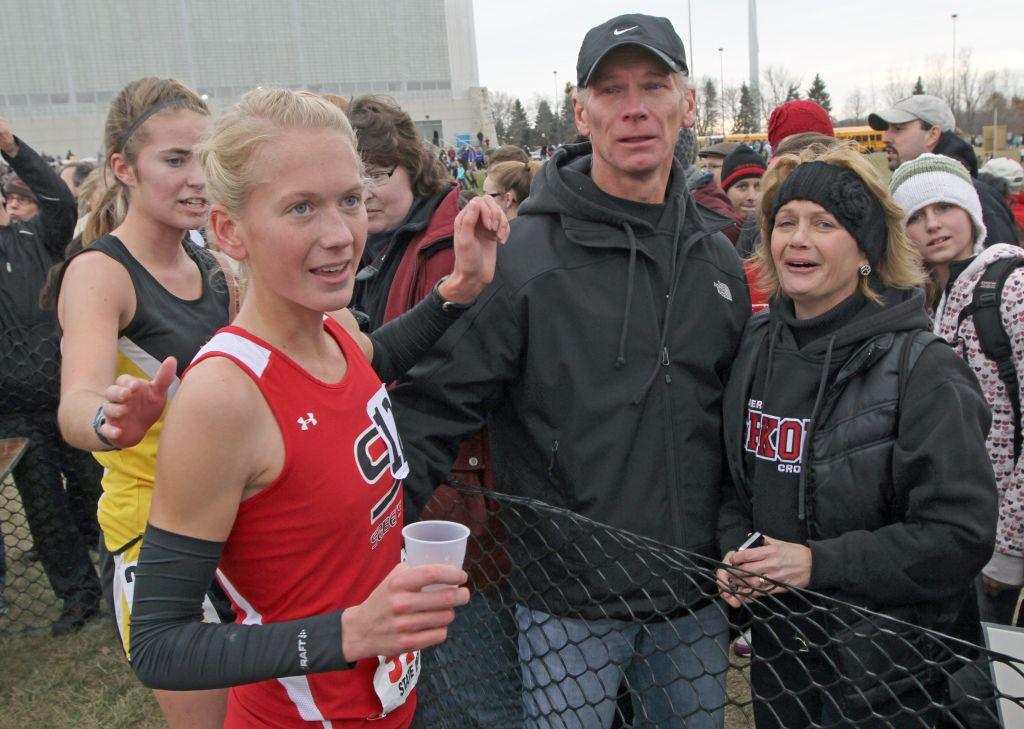 “People kept saying, ‘Good luck, good luck,’” Hauger said. “I think I said, ‘Thank you,’ about 100 times.”
Cross country fans responded in kind, cheering Hauger toward her prep career’s historic finish. Hauger won her fourth consecutive Class 2A state title and her time of 13 minutes, 42 seconds smashed the previous all-time record of 13:54.7 set by Holy Family’s Bria Wetsch in the 2005 Class 1A race.
Encouraged by her time at the two-mile mark, Hauger dug in for a record final push in the 4,000-meter race. She got mixed signals from the ovation near the finish line.
“Whenever people are cheering so loud I always worry someone’s coming,” Hauger said with a laugh. Second-place finisher Anna French of Wayzata was 15.6 seconds behind.
If history is any indication, the next runner who will challenge Hauger is wearing diapers. The last runner to claim four or more consecutive titles was five-time winner Carrie Tollefson of Dawson-Boyd (1990-94). Only two of her victories came in 2A races.
Hauger wouldn’t fully disclose her college short list but said Minnesota is one of five schools she is considering.
French led Wayzata to the girls’ Class 2A title. The Trojans scored 50 points to top Eagan (93) and Edina (129).
Class 2A boys
Stillwater’s school colors are red and black but the Ponies hit the course in pursuit of their second consecutive state title donning more striking colors.
“Everybody and their brother is red and black,” Stillwater coach Scott Christensen said. “I said, ‘We want something we can see,’ and the people at Nike said, ‘How about highway safety orange?’”
Orange shirts and green shorts made these Ponies horses of a different color but the performances were strong once again. Led by individual champion Wayde Hall, Stillwater claimed its first back-to-back titles since winning three consecutive from 1995 to 1997.
Stillwater scored 46 points, well ahead of Edina (80) and Wayzata (90). First-year cross country runner Obsa Ali of Richfield was second and Hopkins sophomore Joe Klecker placed third.
Saturday’s race was the nine-week anniversary of Stillwater’s two-point loss to rival Wayzata at the season’s first meet. Christensen responded by driving the Ponies harder toward their goals.
“You have to treat defending champions a little different than the people who are trying to climb to the top,” Christensen said. “I got on them a lot, more than I normally do.”
Hall said his winning run of 15 minutes, 21 seconds “was all about maintaining through the first mile or two, making sure I’m in the lead pack and really turning it on the last half mile.”
Eric Colvin’s ninth place finish (fifth among runners from qualifying teams), gave the Ponies needed firepower up top.
“You have to put two in the top-10 to be a legitimate championship contender,” Christensen said. “We’ve had good teams but we haven’t always had the big closers up front. Now we’ve got them and that’s the difference.”
Class 1A girls
Blake junior Clare Flanagan needed time to compose herself after winning the Class 1A individual race. She conquered the 4,000-meter course in a time of 14 minutes, 4.1 seconds, securing a second consecutive title she found tougher to defend than chase.
“I think emotionally it took more out of me,” Flanagan said. “I really wanted to defend it. You’re a lot more cautious when you have that expectation.”
She felt the presence of Cannon Falls’ Emi Trost and McKenzie Holt of St. Cloud Christian behind her which “motivated me to keep steady throughout the race.”
Flanagan gained separation with about 1,000 meters to go and kept her pace despite heavy legs.
“I feel relieved; I feel happy,” she said.
Trost took runner up for the consecutive year. Holt finished third. Esko (115 points) won the team title with Annandale (150) edging Minnehaha Academy (151) for second place.
Class 1A boys
Proctor senior Matt Welch honored his team’s nickname, the Rails, by winning the Class 1A individual title.
Welch chugged like an engine to the finish line in a time of 15 minutes, 34 seconds, feeling right at home on St. Olaf’s lumpy course.
“The more hills the better for me,” Welch said.
Senior Charlie Lawrence of Foley took second, reversing the friendly rivals fortunes from last spring’s track and field state meet. Lawrence edged Welch by less than one second in the 3,200-meter run.
The top teams also traded places. Perham, with 37 points, placed ahead of St. Cloud Cathedral (72). A year ago the Crusaders won by a single point.