Phillip LaVallee died after he was struck by a van that crossed to the far shoulder of a Wright County road. 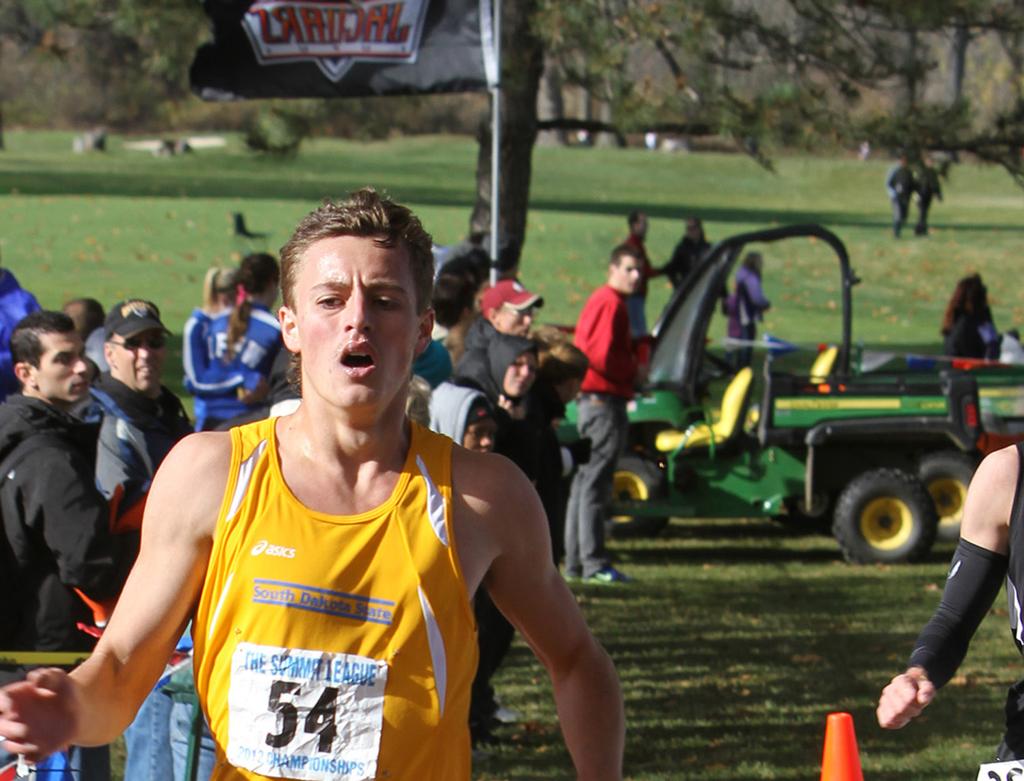 Phillip LaVallee crossing the finish line at the 2012 Summit League Cross Country Championships. He placed 15th in the meet during his freshman season at South Dakota State University.

A van crossed over to the far shoulder of a rural road in Wright County and fatally struck a college runner on a training run a few weeks before the former high school standout was to report for his second season of competing, authorities and school officials said Friday.

Phillip LaVallee, about to start his sophomore year at South Dakota State University in track and cross-country, was hit shortly after noon Thursday in the 8300 block of County Road 19 on the western edge of Otsego and was dead at the scene, according to the Wright County Sheriff’s Office.

The van’s driver, Linda L. Gullickson, 67, of Albertville, Minn., was injured and taken by air ambulance to North Memorial Medical Center in Robbinsdale. Gullickson, who was wearing a seat belt, was in fair condition, a hospital spokeswoman said.

The northbound van crossed the centerline of the two-lane road and struck LaVallee as he ran on the southbound shoulder, according to the Sheriff’s Office.

Sheriff Joe Hagerty said investigators were still “trying to figure out” what sent the van on a clear day so far to the left on the flat and wide road. “We don’t know if it was a distraction or a medical [difficulty]” that was involved, he added.

Monticello track and cross-country coach Dave Wik said LaVallee “was doing everything correctly, being on the right side of the road.”

The coach said he bikes that stretch regularly and described the road as “fairly broad, with two wide shoulders.”

Wik said he and LaVallee had been texting barely 30 minutes earlier about the coach finding his former athlete a race over the coming weekend and locating one in Rockford.

“He was going out to get a training run to prepare for that race,” when the van hit him a little less than 3 miles from the LaVallee home, the coach said.

Wik said he saw over the five seasons of coaching LaVallee that he “had the gift. He was just a natural. On top of that, a great work ethic, great family and very competitive.

“He always strove to get better; just your dream athlete.”

LaVallee also excelled in the classroom at Monticello and at college in Brookings, scoring a grade-point average above 3.6 for a spot on the Summit League’s Distinguished Scholar list, said school sports information director Jason Hove.

LaVallee finished 15th last season in the league cross-country meet, and “we were expecting him to be a key contributor this fall,” Hove added.

As is the case with many runners, LaVallee had no identification on him, the sheriff said.

“We figured somebody would be missing him,” Hagerty said. “We received a call [about 8 p.m.] from the family that he went for a run at noon and hadn’t returned.”

Hagerty and a member of his force went to the home to break the news to the LaVallees. The sheriff knew the father, Greg, having both grown up in nearby St. Michael.

“I know his parents, his brother, sister. That type of stuff,” the sheriff said.