Coaches work to promote awareness among athletes about distracted drivers without being alarmists. 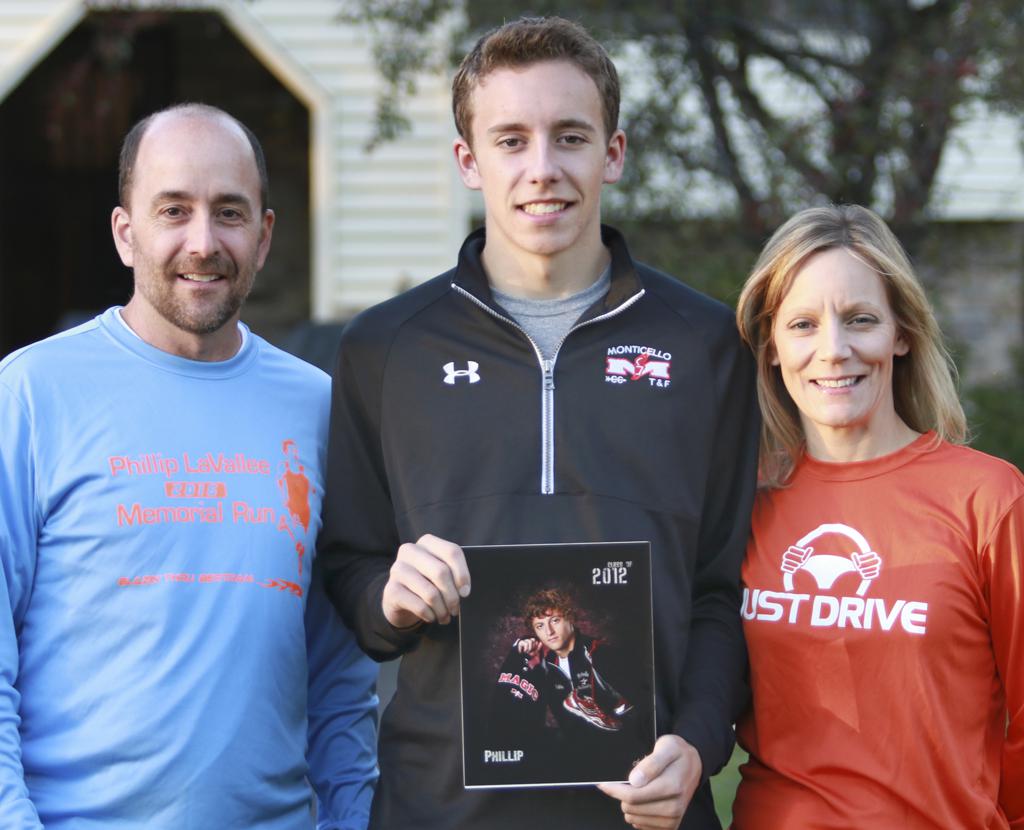 Greg, Marcus and Amy LaVallee with a photo of the LaVallee's oldest son Phillip, who was hit by a distracted driver while on a run in August 2013. His parents bring the photo, by Chris Lommel, to talks to raise awareness on the issue. Photo: Cheryl Myers

Greg LaVallee leaves his northwest metro home each Aug. 8 for a run to honor his son Phillip, a decorated cross-country runner at Monticello.

The route takes Greg along Wright County Hwy. 19, north of the Albertville Premium Outlets, where a van struck and killed his 19-year-old son during a morning run on that day in 2013. The driver, who received a call on her cellphone about the same time as the accident, later pleaded guilty to gross misdemeanor criminal vehicular operation.

The cars buzzing past make Greg nervous, but he presses on with the annual tribute.

Varsity cross-country coaches know the feeling. They collectively send out thousands of runners for training runs on the roads around their schools during the fall. Some overseeing teams with as many as 100 athletes, they share LaVallee’s apprehension as well as concerns about an increase in distracted driving.

Traffic fatalities reached 411 last year in Minnesota, compared with 361 in 2014, a 14 percent increase, according to Minnesota Department of Public Safety data. Of those, distracted driving was listed as a contributing factor in 74 deaths in 2015 — a 21 percent increase.

In the wake of LaVallee’s death, Monticello boys’ cross-country coach Dave Wik eliminated some training routes that brought runners through higher-traffic areas. General coaching mandates for runners include running into traffic and staying single-file on the shoulders of roads, making eye contact with drivers at intersections and looking twice even when crossing with a green light.

Coaches work to promote awareness among athletes without being alarmists. Boys’ and girls’ cross-country, with a combined 16,422 runners in the 2015-16 school year, ranks fifth in participation among all sports under the auspices of the Minnesota State High School League.

Running loops on the campus grass, while safer, isn’t always practical, Stillwater boys’ coach Scott Christensen said. Each of his 79 runners, grades 9 to 12, logs 50 miles per week — a total of almost 4,000 miles.

LaVallee earned all-state honors as a senior, then ran for South Dakota State as a freshman. He was running into traffic when struck from behind by a van that crossed both lanes.

“There isn’t a day safety isn’t considered in my running plan,” Wik said. “But at the same time, Phil was doing everything right, and that is a constant struggle.”

Last week, a group of 10 runners on the Minnetonka girls’ cross-country team prepared to cross with a green light when a car sped through the intersection. Coach Jane Reimer-Morgan said she never saw the driver even tap the brakes. The episode reinforced awareness for team members.

Junior Libby Halbmaier, in the group of 10 runners, said she experienced a close call last year when a driver nearly missed a stop sign while texting.

“It was kind of alarming,” said Halbmaier, the Skippers’ No. 2 runner so far this season. “I don’t even have my phone in the front seat. It would be awful to hit someone because it would change a lot of lives.”

“You see cars that don’t move over or even swerve at you because they are on the phone,” he said. “I’ve run into a ditch to avoid a car. It definitely reminds me of what happened. But I try not to get too worried about it.”

LaVallee said he often reminds friends to put down their phones, a message he hopes is delivered in driver’s education classes.

Eastview boys’ coach Tom Sharp said an inattentive driver taking a right turn on a green light “took out the back tire” of the bicycle a Lightning athlete was riding to summer run club.

“I’m telling the kids constantly, ‘Cars win,’ ” said Sharp, who bicycle-commutes to school year-round and notices more issues with distracted or inattentive drivers. With safety in mind, Sharp provided more of his runners this fall with running belts, capable of storing a cellphone, in case of emergency.

Mounds View boys’ coach Ross Fleming reminds his runners of their responsibilities and said “they are going to be doing pushups” if he sees them not looking before crossing intersections.

Peter Janiszeski, who coaches both Luverne teams and serves as president of the state’s cross-country coaches association, wrote in an e-mail that he tells runners they “should never assume a driver sees them. They need to drive for the driver. I really try to hammer it home for the first few weeks, but after that I don’t say too much.”

Education and awareness became Greg and Amy LaVallee’s mission. They contacted Joel Feldman, co-founder of Pennsylvania-based EndDD.org (End Distracted Driving) to speak in March at Monticello. Feldman and Dianne Anderson lost their daughter, Casey, in 2009 when she was struck by a distracted driver.

The LaVallees followed Feldman’s model, taking their message to high school students at Monticello, Buffalo, Lakeville North, Rogers and St. Michael-Albertville, plus Rotary clubs and businesses in other communities.

“Everybody knows texting is a bad idea though some people still choose to do it,” Greg said. “But talking on a phone is so dangerous, even with these hands-free capabilities. You’re still cognitively distracted.”

Wik, an avid runner, said he sees drivers on their phones at almost every intersection. Last week, one of Wik’s assistant coaches and four Magic runners prepared to cross at a green light when a driver took a right turn without acknowledging the group. When the coach raised his hands in concern, the driver made an obscene gesture.

“It wasn’t close but it was closer than it needed to be,” Wik said. “Road etiquette isn’t very good. People are in too big of a hurry or too self-centered.”