Freshman runner Tierney Wolfgram's compete level is second to none

Tierney Wolfgram of Math and Science Academy is a three-time state champion. 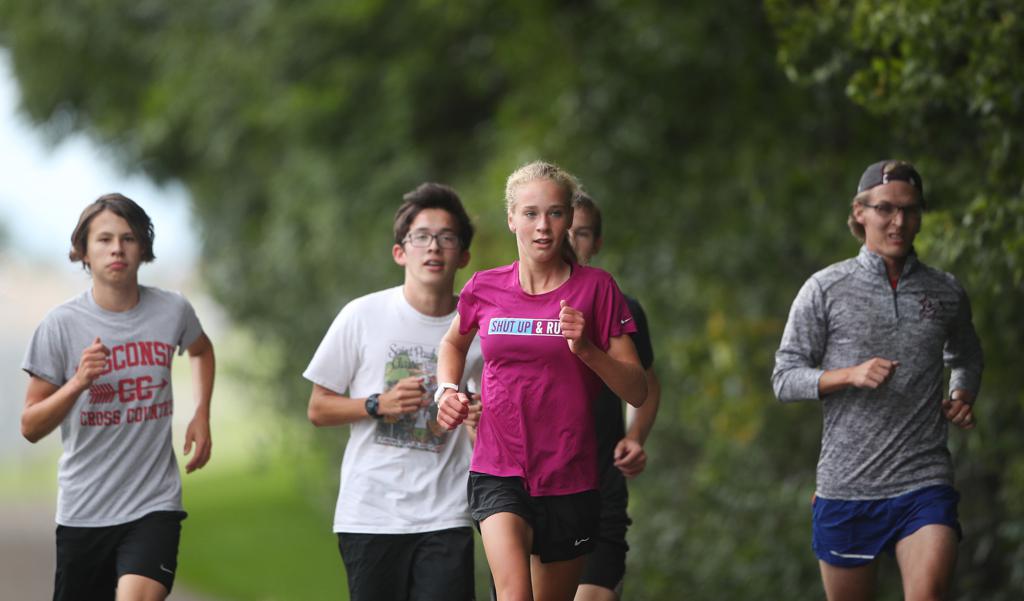 For once, Tierney Wolfgram was struggling to find a way to best her competition.

After bolting to Class 1A state titles in cross-country and the 1,600- and 3,200-meter races in track as an eighth-grader for Math and Science Academy, Wolfgram couldn’t seem to find a way to beat her siblings in countless games of Monopoly Deal.

All summer her brothers, Phillip and Campbell, and her sister, Katherine, kept Tierney at bay.

“My siblings are creative so they come up with their own way to play it, and I got so mad because it wasn’t really fair and I was last and they were beating me,” Wolfgram said. “I got so upset over it just because I couldn’t win.”

That’s not an issue the freshman runs into often. She along with Winona Cotter’s Grace Ping and Farmington’s Anna Fenske are ranked by MileSplit USA as the top three freshman distance runners in the country.

That competition is important for Wolfgram, who Math and Science Academy coach Brendan Ruter says is driven by her own expectations and self-assigned goals. This year, that’s to challenge for more state titles and qualify for the national meets run by Nike and Foot Locker.

At Nike’s regional meet last year, Wolfgram finished ninth, outside of the top-five qualifying spots for December’s national meet. This year, she’s already set a time she believes will qualify her for both the Nike and Foot Locker national races.

“It’s really, I would say kind of remarkable as a ninth-grade girl just to be that focused to the sport or her craft as she is,” Ruter said.

That’s not new for Wolfgram. After Ruter took over as the coach at Math and Science Academy, a charter school in Woodbury, just before last cross-country season, he said he was immediately struck by her lofty goals.

That competitiveness manifests itself throughout Wolfgram’s life. Growing up she played soccer, and strove to make one of the top club teams in the area. That meant devoting herself to daily practice sessions with her mom, Karlotta, at the park, where she would run through countless drills.

Even now, during shorter cross-country practices Wolfgram adds a little flair. Each time she approaches an intersection, she’ll make eye contact with the boys on Math and Science Academy’s varsity team before bolting across the street the second the light turns green.

The goal? To make it to the other side as quickly as possible while only stepping on the white horizontal lines that stretch across the crosswalk.

“I like making stuff a competition,” Wolfgram said. “Some of my teammates get a little tired of that sometimes, which I understand, a lot because my siblings are a lot like that.”

She won’t need to look far for competition this year. After spending last year in Utah, Ping is back in Minnesota. As a seventh-grader, she topped Wolfgram for the state titles in cross-country, the 1,600 and the 3,200.

Ping won this year’s first duel, with a time of 17:45 to win St. Olaf’s High School Showcase on Aug. 31 in Northfield. But don’t expect the motivation of Wolfgram, who finished 19 seconds behind, to falter.

“I would say internally is where the drive is coming from,” Ruter said. “… Tierney just hates to lose whether it’s in the classroom or on the field.”