Running on Rosemount's cross-country is another bond joining twins 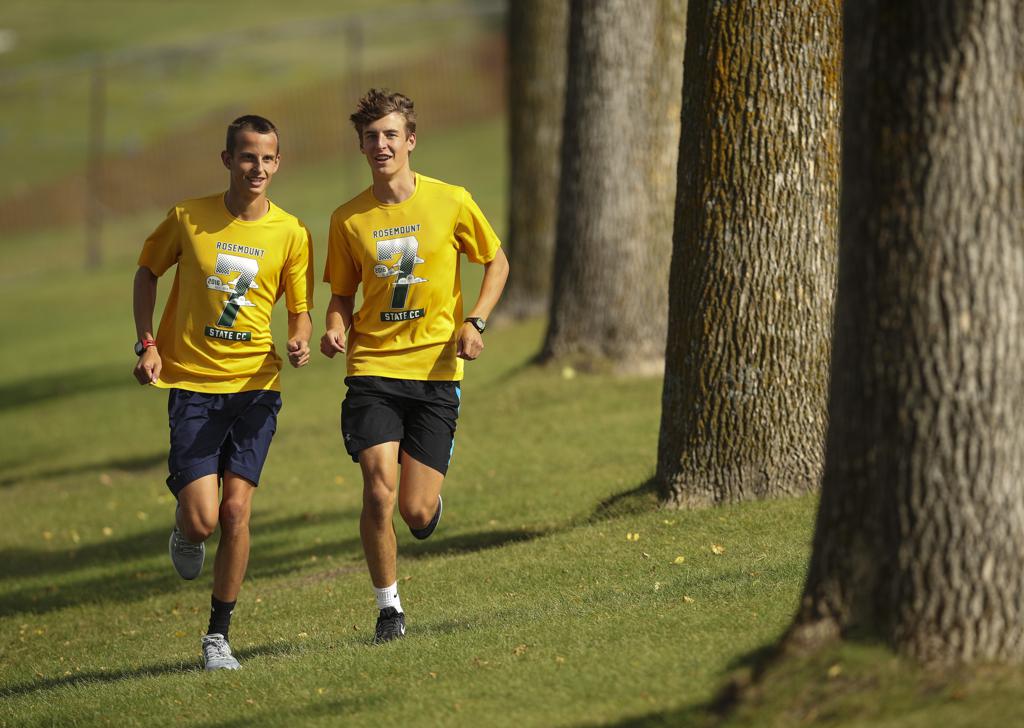 Luke and Jack Labatte are twins. They have a lot of similarities but are hardly identical.

Luke is one of the state’s elite cross-country runners while Jack is just making his way onto the Rosemount varsity squad. Luke is ranked No. 8 in the state in Class 2A, and a big reason the Irish sit 11th in the coaches association’s team rankings. The fraternal twins are juniors.

“Luke is a more naturally gifted runner, but he displays a lot of effort daily to improve,” Rosemount coach Chris Harder said. “Jack has worked his way on the varsity this season. He worked hard in track to break the five-minute mile barrier, and from there has shown steady improvement.”

Luke finished 27th in the state meet a year ago, leading the Irish to 12th place. He covered the 5-kilometer course at St. Olaf College in Northfield in 16 minutes, 27.7 seconds. It was over 33 seconds faster than the previous year when he wound up 102nd.

“Luke has been a varsity runner from the start as a freshman,” Harder said. “We haven’t had many varsity regulars as a freshman on the boys side.”

Jack, on the other hand, has had to build up his workout repetitions and endurance while battling asthma. He uses an inhaler to control the symptoms.

“Some days he has a hard time with it,” Luke said. “It took him a little longer to get his repetitions up. He’s getting to a higher level now.”

They ran their first varsity meet together earlier this month. Luke was the medalist in the Rochester Mayo Invitational with a time of 16:36.41 over the 5-kilometer course at Eastwood Golf Course. Jack finished 55th in 18:30.5.

“Jack really pushes himself in practice, and all that hard work finally paid off for him,” Luke said. “It was a really cool experience having Jack out there running with me.”

It was an experience Jack always will remember fondly, too.

“It was a very big accomplishment for me,” Jack said. “It involved a lot of hard work, and never giving up.”

Harder attributes the twins’ top-notch qualities to their upbringing.

“Both are better people than they are runners,” Harder said.

Their father, Wade, is an elementary school principal and played football at St. John’s University while their mother, Patty, works for a law firm.

“They are well-respected and friendly. Both are strong character individuals.”

The twins both played baseball when they were younger, but Luke played basketball while Jack played hockey. Neither followed in their dad’s footsteps into football. They moved on to cross-country and track in seventh grade.

“Our parents have been supportive in whatever we’ve done,” Jack said. “They are very encouraging. They push us to be the best we can in everything we do.”

The brothers are best of friends, always reminding each other of who is older (Jack by three minutes) and who is taller (Luke by two inches).

“Luke is my best friend,” Jack said. “It’s been that way for as long as I can remember.”

They are also always partners when the cross-country squad conducts friendly team competitions on the fall training trip to Deep Portage in Hackensack. They compete to win.

Luke won the around-the-world basketball tournament this year while Jack got on a roll en route to the ladder golf title the previous year. They recently fell in the bocce finals in the rain and darkness, and there wasn’t any finger pointing.

“I don’t want to blame Luke,” Jack said while laughing. “Let’s just say it was a team effort that we lost.”

That attitude describes the Irish cross-country team as well.

“We are a tight-knit group,” Luke said. “It’s one of the greatest things I’ve ever been a part of. We have a closer bond every day.”